Jesse Sandberg, an MS student in the Graduate Program in Computational and Integrative Biology, is joining the group. Jesse will be using free energy calculations to predict whether small molecules like insecticides, antibiotics, and candidate drugs will block human GABA(A) receptors, causing neurotoxicity.  Welcome, Jesse!

Collaborative work with the Baenziger and Ulens labs was just published in Nat Chem Bio!  “A lipid site shapes the agonist response of a pentameric ligand-gated ion channel” investigates the role of specifically-bound lipids in gating a neurotransmitter receptor.  Kristen contributed atomistic simulations of structures from the Ulens lab.

Ruchi’s paper “Sequence Specificity Despite Intrinsic Disorder : How a Disease-Associated Val/Met Polymorphism Rearranges Tertiary Interactions in a Long Disordered Protein” was just published in PLOS Computational Biology!   This paper focuses on a common variation in Brain-derived Neurotrophic Factor (BDNF).  About 70% of the US population has two copies of the “V” form of the protein, 25% has one copy of the “V” form and one copy of the “M” form, and 5% has two copies of the “M” form.  The particular copies you have can affect how you store memories and respond to stress. 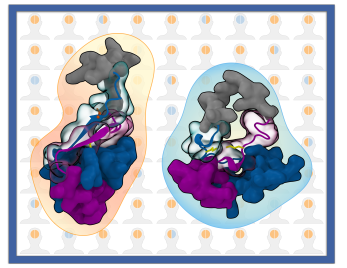 The region of the protein containing the variant is disordered, and normally we would expect the “V” and “M” forms to behave very similarly.  It was unclear why this small change would make any difference at all.  In this paper we found that although the two forms do interact similarly with water, the “M”  form (on the right) introduces a specific “Met-Met” interaction. We often don’t consider Met-Met interactions, even though they are common in structured proteins.  Here we showed that they can also affect the behavior of disordered proteins, which in turn contributes to the natural variation among human brains.

During her thesis, Ruchi produced thousands of plots, diagrams, and figures in an effort to understand why a seemingly subtle change can have substantial effects. Then she did much harder work: left most of these figures on her hard-drive, and selected a compelling few that revealed a very cool scientific story.  Congratulations, Ruchi!

New Paper Published in PLOS ONE

A paper resulting from a collaboration between the Brannigan group and the Joseph Martin group in Rutgers-Camden Biology has just been published! “L-3,3’,5-triiodothyronine and pregnenolone sulfate inhibit Torpedo nicotinic acetylcholine receptors” is primarily an experimental paper that tests hypotheses about how the electrostatic charge of hormones changes their effects on acetylcholine receptors.

Understanding this information helps clarify why certain molecules bind to these receptors and others don’t, which is important for designing new molecules like drugs.

The study takes advantage of a very convenient property of thyroid hormone: thyroid hormone changes its charge (or protonation state) with a very slight decrease in physiological pH.  The experiments were mainly carried out by Steven Moffett, a PhD student in the Martin Lab.  Congratulations Steve!

Rulong successfully defended his Masters thesis “The effect of phospholipid species on non-ideal behavior in cholesterol-containing bilayers”! He’ll be moving on to the PhD Program in Biochemistry at the University of Houston, in Fall 2019.  Congratulations, Rulong!

New paper Published in the Journal of Membrane Biology

Congratulations to Kristen and Liam – their paper Untangling direct and domain-mediated interactions between nicotinic acetylcholine receptors in DHA-rich membranes was accepted to the Journal of Membrane Biology! This paper builds on Liam’s previous results that nAChR boundary lipids are enriched for polyunsaturated acids (PUFAs) in membranes that form domains, like the white lipids in the top row.   Here we tested whether this was still true if the PUFA-rich domains could not form (bottom row), as well as how domain formation affects oligomerization of nAChRs. nAChRs seem to be corralled by the domains, so they dimerize at lower protein concentrations. 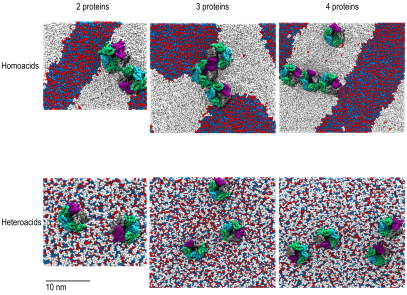 Ruchi’s paper “Sequence Specificity Despite Intrinsic Disorder : How a Disease-Associated Val/Met Polymorphism Shifts Tertiary Interactions in a Long Disordered Protein” is now submitted, and also available on ChemRxiv.  This paper focuses on a mutation in the prodomain of Brain-derived Neurotrophic Factor (BDNF), which is associated with a range of stress-related disorders and neurodegeneration.  The mutation can have dramatic effects on axon growth, but it’s such a seemingly subtle mutation (one amino acid is mutated to a similar amino acid, in a dynamic and disordered protein containing almost 100 amino acids), it’s surprising there are any detectable effects.  The goal of this paper was to figure out the origin of these differences, so that we can improve our ability to predict which mutations of disordered proteins will actually affect protein function.

These simulations were done with atomistic resolution in explicit water, and took over 30 million hours of CPU time generously allocated by the Rutgers Discovery and Informatics Institute on the supercomputer Caliburn.  One of the most interesting parts for us: to extract useful information from this large amount of generated data, we had to conceptualize (“see”) the protein in an entirely different way.

New paper in Press at BBA-Biomembranes

The preference of the nicotinic acetylcholine receptor (nachr) for certain lipid environments has been a subject of debate for decades. Liam’s paper “Boundary lipids of the nicotinic acetylcholine receptor: Spontaneous partitioning via coarse-grained molecular dynamics simulation”, which was just accepted at BBA-Biomembranes,  uses coarse-grained molecular dynamics to equilibrate the local lipid environment around an nAChR in a ternary membrane mixture.  We find a high affinity of omega-3 fatty acids (like those found in fish oil) for the nAChR interface with the membrane.  This suggests there could be specific interactions with nAChR that underly the benefits of fish oil for function of the central nervous system.